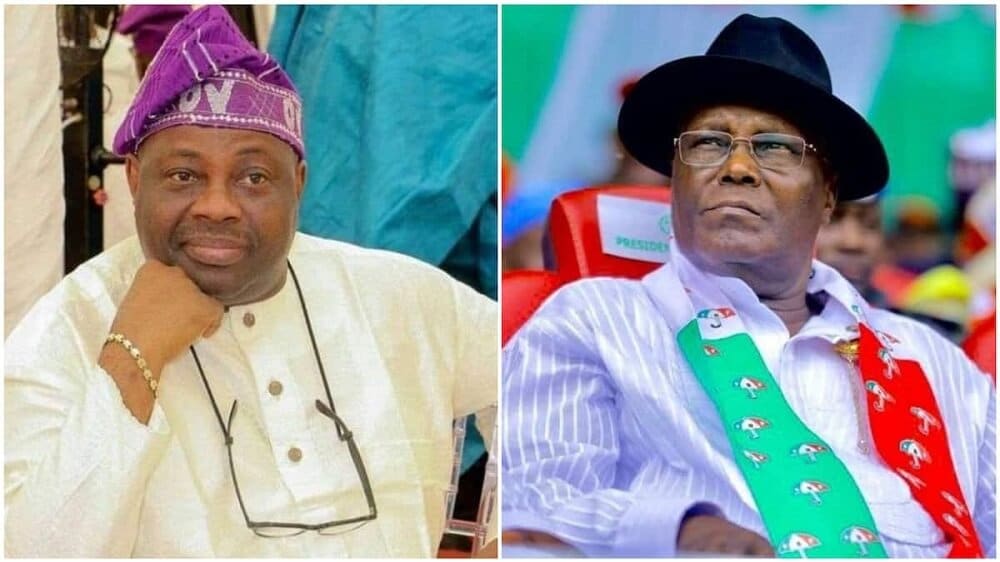 The presidential campaign council of the All Progressives Congress (APC) has slammed a chieftain of the Peoples Democratic Party (PDP), Dele Momodu over his recent criticism of the manifesto presented by the presidential candidate of the ruling party, Bola Tinubu.

The APC in a statement on Monday by the spokesperson of its presidential campaign council, Festus Keyamo, said Momodu is not qualified to criticize the document presented by Tinubu.

Contents
The presidential campaign council of the All Progressives Congress (APC) has slammed a chieftain of the Peoples Democratic Party (PDP), Dele Momodu over his recent criticism of the manifesto presented by the presidential candidate of the ruling party, Bola Tinubu.Momodu Can’t Comprehend Tinubu’s Action PlanAtiku Not Fit To Be President

Keyamo also hit the PDP presidential candidate, Atiku Abubakar, mocking him for calling himself a unifier when he can’t even resolve the crisis rocking his own party.

Keyamo also accused the former Vice President of being lazy, accusing him of lifting the policies and programmes of the Muhammadu Buhari government and claiming them as his own manifesto.

Naija News understands the statement from Keyamo on Monday comes as a response to the position by Momodu, the Director, Strategic Communications of the PDP presidential campaign council who submitted on Sunday that Tinubu’s manifesto is a copy and paste of the Abiola Hope ’93 manifesto mixed with President Muhammadu Buhari’s manifesto in 2015.

The Minister of State for Labour said the PDP has wasted its opportunity and Nigerians would never vote for the party again.

He said: “It appears the Peoples Democratic Party is unaware that Nigerians have since dismissed it as an unserious and broken opposition party. If nothing at all, its latest press release signed by Chief Dele Momodu attests to its crass unseriousness.

“The PDP’s attempt to pooh-pooh our Action Plan only ended up as nothing but a joke. Even more pathetic and disastrous is the situation Chief Momodu has found himself today.

“That is, having to stage a complete somersault in a cheap hatchet job against our highly revered candidate, Asiwaju Bola Ahmed Tinubu, simply because he needed to impress his new paymasters.

“Let us remind the turncoat, Dele Momodu of what he said about the same Asiwaju Bola Ahmed Tinubu only on October 26, 2019 in a column published in Thisday newspaper entitled, “Bola Tinubu And His Date With Destiny In 2023”: “I have no illusions that Tinubu will definitely perform as President of Nigeria, if he ever contests & wins. He has a knack for identifying brilliant minds and fertile brains, and the ability to nurture them to greatness. He has demonstrated this repeatedly and almost endlessly. Examples abound without doubt.

”What is obvious is that even the hirelings of the PDP like Momodu are clear believers in Asiwaju’s ability and capacity to deliver on his promises but have decided to play politics this time around.”

He said Momodu should have stuck to his celebrity report lifestyle rather than dabble into the more cerebral activity of critiquing policy documents.

He said; “True to type, PDP has again reacted, in our view, without even reading the content on the document. All they are interested in is the title of our message, not the quality of our ideas. We are extremely amused, but not entirely shocked.

“This only demonstrates once again their incurable incapacity to act as a credible opposition to the ruling party. Dele Momodu should have rather stayed in his accustomed lane of praise-singing socialites and the likes instead of dabbling in the more demanding job of critiquing policy statements. It is clearly not his forte! The quality of his recent write-up is a testament that his team is not made up of experts in governance and policy formulation. He must have gathered his team of photographers and video editors to read through a document that is far beyond their tabloid-centred minds. One would have expected Dele Momodu to make clear comparative analyses between Hope ‘93 campaign document of MKO Abiola and the Renewed Hope document of Asiwaju Bola Ahmed Tinubu.

“He goofed miserably. He was just huffing and puffing without substance. A write-up that was intended to be a critique of a document on its supposed lack of details ended up itself as an empty shell.

“We are surprised that Dele Momodu could ask what our candidate is known for. Since he has asked either out of self denial or selective amnesia, we will answer him with his exact words in the past.

“Hear him in another portion of the aforementioned article: “Tinubu assembled a fantastic team of technocrats and created the gargantuan master plan for modern Lagos.

“Dele Momodu has lived in Lagos for more than three decades. He surely knows the state of Lagos pre and post 1999. He has praised, on many occasions and at different fora, the imperishable legacies and monumental milestones of Asiwaju Bola Ahmed Tinubu in Lagos.

“In the same piece, Momodu narrated how Asiwaju Tinubu began the “systematic and robust increase of Lagos’ Internally Generated Revenue, making the state one of the richest self-sustaining governments in Africa”, and how “he single-handledly (sic) revived and revamped Local Governments in Lagos and brought developments to practically every part of the state.” Asiwaju Bola Ahmed Tinubu is known for “his glittering records and achievements in both private and public sectors.”

Atiku Not Fit To Be President

Rather than attack Tinubu, the APC urged Momodu to come up with ways of selling the PDP candidate to Nigerians despite the ‘many sins’ and allegations against him.

Keyamo said; “Can Dele Momodu also say this about his principal, Atiku Abubakar, whose time as Vice President has no other legacy to be remembered for other than the failed privatization exercise he was assigned to supervise where he sold national assets to his friends and cronies for peanuts?

“Should we remind you, Dele Momodu, of the distasteful remarks made by Fmr. President Olusegun Obasanjo on your party’s flag-bearer as Vice President?

“Of course, track records should be critical in evaluating any party or candidate. If we may ask Dele Momodu, what are your party’s track records? When the country had substantial receipts from crude oil export, your party squandered it all.

“PDP represent what the Yoruba proverbially call “Arungun” (squanderer). They promised the people of South-East Second Niger Bridge for 16 years, yet, nothing was built. Today, thanks to President Muhammadu Buhari of APC, the Second Niger Bridge is completed.

“At a time, a former spokesperson of your government said Nigeria couldn’t afford train coaches, much less rail lines. Today, we have Lagos – Ibadan, Itakpe – Warri rail lines. Even in the face of dwindling resources and global economic challenges, we have lifted millions of Nigerians out of poverty with our National Social Investment Programs, widely acclaimed as the first in Africa in scale and innovation.

“Nigeria has become a sufficient rice-growing nation, rated highest in rice and sorghum production in Africa by the United States Department of Agriculture (USDA), a status PDP thought was impossible.

“Our efforts in power generation and distribution is yielding good results, unlike the $16 billion squandered by PDP under Obasanjo under the guise of power projects with nothing to show for it. Pledges made by PDP governments are being redeemed by our party.

“Pensions and other entitlements of workers in PDP’s failed privatization scam have been paid up to date.

“Sure, like Dele Momodu once said before he took up his new mercenary job from PDP, Asiwaju has “too many technocrats to pick his team from.” He is surrounded by “brilliant, intelligent, accomplished and cosmopolitan leaders” across all sectors, spheres and walks of life.

“He will hit the ground running when he takes over power in May 2023, by the grace of God and most Nigerians. As he did in Lagos state, he will assemble “quality and talented leaders” in his cabinet that will see to the delivery of our campaign promises.

“On the contrary, the 5-point agenda of the flag bearer of the PDP is nothing to write home about. Top on the list is his lip service to unify Nigeria. We can only laugh.

“This is a man that his party is torn between division and disarray. Till now, he is yet to fix it. What a failure! His 74-page campaign document has in it ongoing milestones of the President Muhammadu Buhari led administration.

“From lifting millions out of poverty to power generation to economy revitalization, it is clear that they are either too lazy to think or bereft of fresh ideas. Everywhere Atiku went to, he was never caught speaking to issues of governance.

“Rather, if he is not promising the Igbo Presidency in 2027, he is playing the ethnic card (like in Kaduna). Nigerians are wise, they know he has nothing to offer.

“Finally, Dele Momodu and his party failed woefully to point out a single example of the copy-and-paste he referred to in the press statement released by him.

“It was expected that he would have cited one example of an original document from which we copied and the portion in particular. In all, his press release is just a juvenile prose, bereft of details and substance, full of highfalutin nonsense and signifying nothing.”