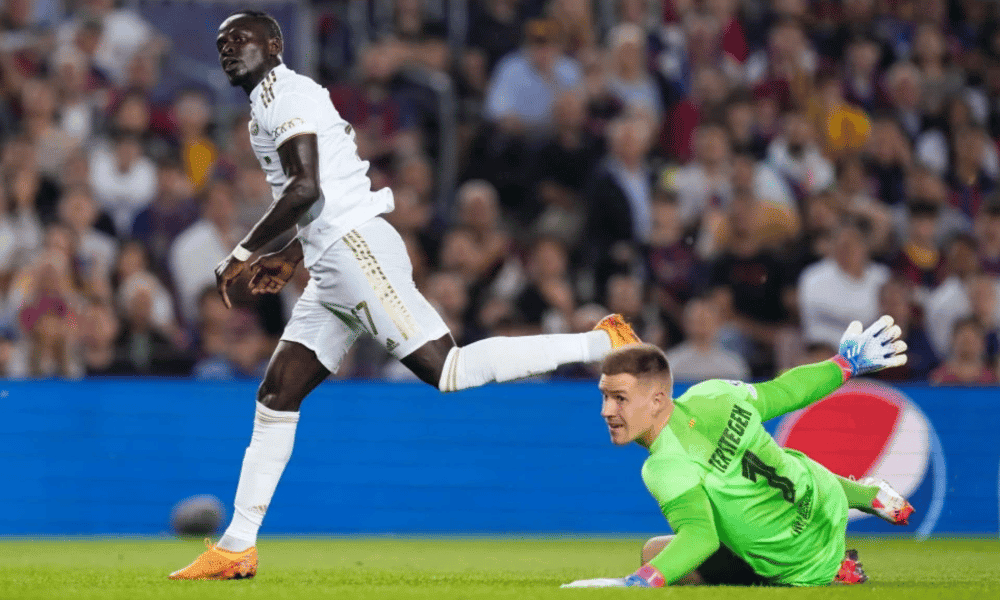 The Xavi’s team bid the Champions League farewell for the second consecutive year after being defeated 3 goals to nil at Camp Nou.

Bayern Munich defeated the Catalan giant twice in the group stage, winning both contests 3-0 and 5-0 overall.

The Blaugrana’s fate was decided earlier before the match when Inter trashed Viktoria Plzen which stamped the end to their participation in the Europa League.

As a result, the Spaniards faced the German machines with sticks and stones.

However, they managed to save some of their pride following a first-half mauling delivered by Senegalese’s Sadio Mane and Cameroonian forward, Eric Choupo-Moting.

Bayern’s first goal came on 10 minutes after the kickoff when Serge Gnabry fired a long diagonal ball which was caught on the run by Sadio Mane after beating Hector Bellerin then placed the ball past Marc Andre ter Stegen.

When Gnabry passed the ball to Choupo-Moting and the Bayern player found space for the shot, Ter Stegen was once again easily beaten by a well-coordinated attack.

In the second half, Dembele made a break for it on the counter but was unable to connect with Lewandowsky.

At the stoppage time, Benjamin Pavard made it three, making the situation even worse for Xavi and his men.

Bayern Munich has won their last five games next to Inter Milan, who won three, lost one and drew one in Group C.